×
Home » Advice » Why You Should Ditch the Sugar for Breakfast

How do you start your day? Do you have a bowl of that yummy granola with a health claim on the package? It’s all organic, even the honey in it – so it must be good for you, right? Or are you more of a continental breakfast lover: jam on toast, sometimes a lovely crumbly croissant and a tall glass of freshly squeezed juice? And what about the kids? Do you cave in when they scream for their favourite cereal with all those fun cartoon characters on the box?

Let's face it. For most people, breakfast is a starch-based, sugar-coated affair. It provides a short burst of energy and dumps them shortly after. By midmorning they find themselves crawling to the biscuit tin just to keep going.

Here’s the rule of thumb: If your breakfast comes in a box, it’s most likely not a good choice. 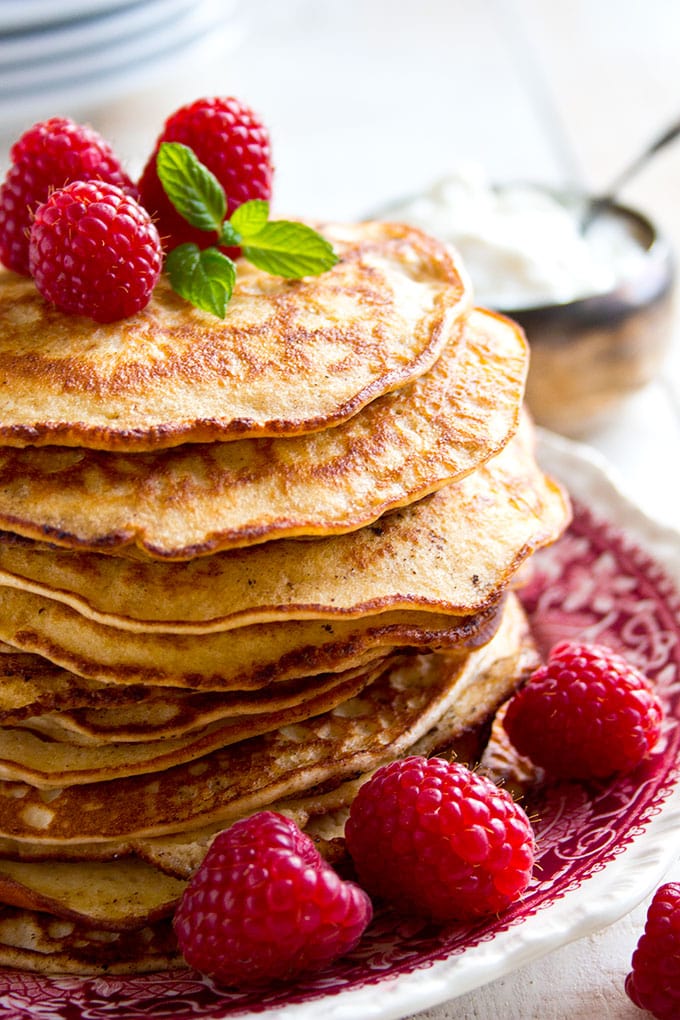 Just check the label of your breakfast cereal – many “healthy” mueslis contain just as much sugar as the infamous Kellogg’s Honey Smacks (launched in 1953 as Sugar Smacks)!

And you’ve surely read before that juices can contain as much sugar as a can of Coca Cola. Most orange juices, for example, come in at 10 grams per 100 ml. If you drink a 200 ml glass you’ve consumed the equivalent of 5 teaspoons of sugar. Enjoy it together with a bowl of fruit yoghurt - another serial sugar offender - topped with cereal you’ve probably consumed your entire recommended daily amount of sugar before you even leave the house.

Over the course of a year, this adds up to over 1000 cubes at breakfast. Our four- to 10-year-olds are eating twice as much sugar as they should, and their well-meaning parents are often not aware they are serving their offspring future health problems on a plate (or in a bowl). 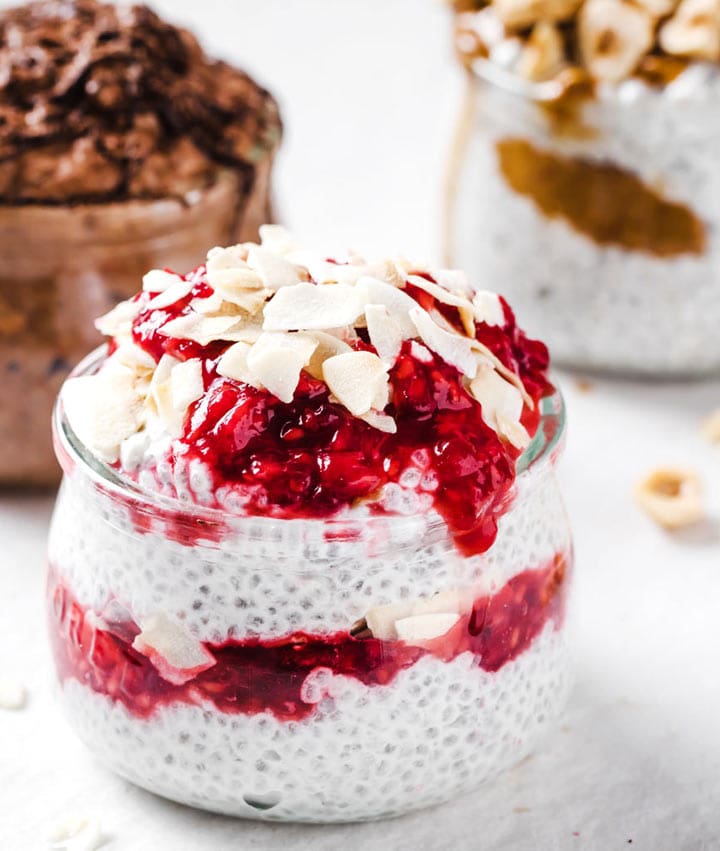 Since the millennium an increasing number of children in the UK have been diagnosed with Type 2 diabetes, some as young as seven.

We’re not quite on a par with the US yet where a 5.5 stone 3-year-old girl with Type 2 diabetes made the headlines a couple of years ago (her condition has been successfully reversed after medical intervention), but it’s time to take a step back and think about better food choices.

Health researchers warn that about one quarter of five-year-olds have rotting teeth and almost one fifth are classed as obese by the time they enter secondary school.

So how about a few sugar free breakfast ideas?

We’ve ditched most cereals in our house, don’t eat bread on a daily basis (I have yet to expand my low carb baking skills) and include healthy fats and proteins in every meal.

The following make a regular appearance on our breakfast table: 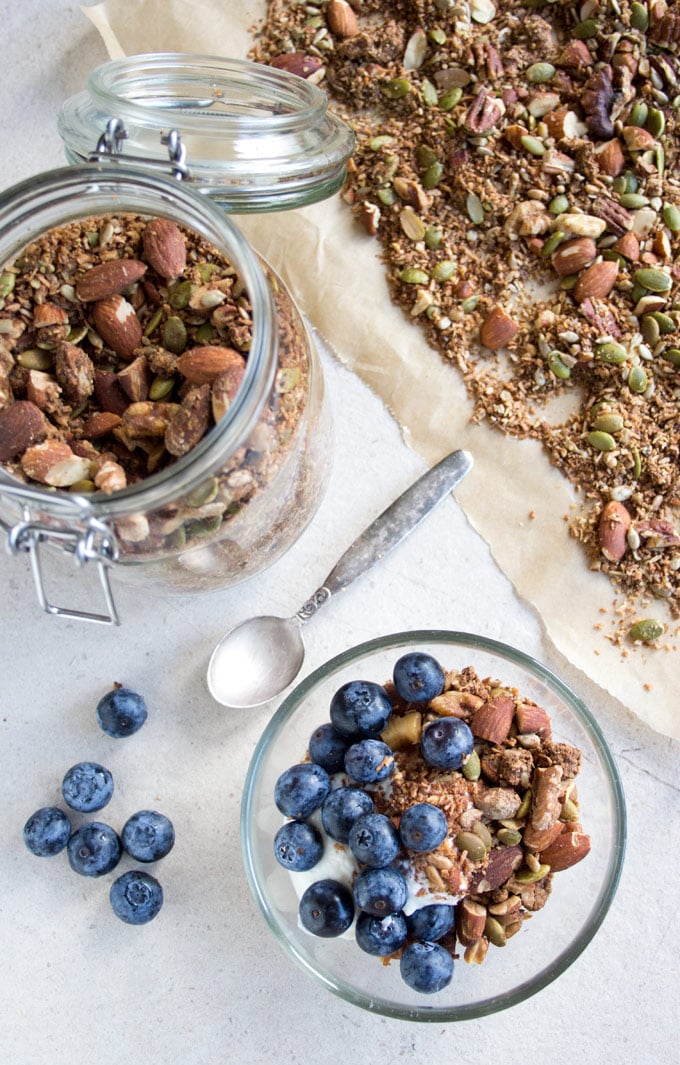 Eggs in all variations. We eat them soft-boiled, fried, scrambled or poached. Scrambled eggs with ham, cheese or wilted spinach take minutes to make and will keep you satisfied until lunch. On weekends I might make chorizo egg muffins or Vietnamese scrambled eggs.

Dinner leftovers. Who says you can’t eat veggies, meat or fish for breakfast? The Japanese have been doing it since the dawn of time, and their health record looks a whole lot better than ours.

Homemade granola. I make a big batch of this peanut butter granola on weekends that never keeps long enough. Or just mix nuts, coconut flakes and seeds such as pumpkin, sunflower and flax and eat with plain yoghurt and some fruit.

Pancakes. Yes, pancakes. I love these almond and cream cheese pancakes. They are made with almond flour instead of wheat flour, which makes them low in carbohydrates. They are nutrient-dense and filling and were a hit with the kids. I made them the day before and just popped them in the toaster in the morning.

Coconut flour porridge. This might sound a bit weird, but bear with me. You gently cook 2 tbsp coconut flour and 1 tbsp flaxseed with milk or unsweetened almond milk. If you like, stir in some butter or cream. My blogging friend Low Carb Maven adds a raw egg in hers - it increases the protein content and makes the porridge taste incredibly creamy. Top with cinnamon and/or berries.