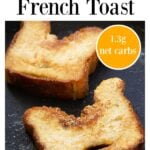 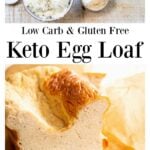 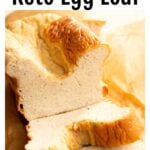 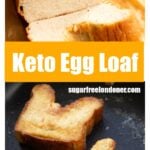 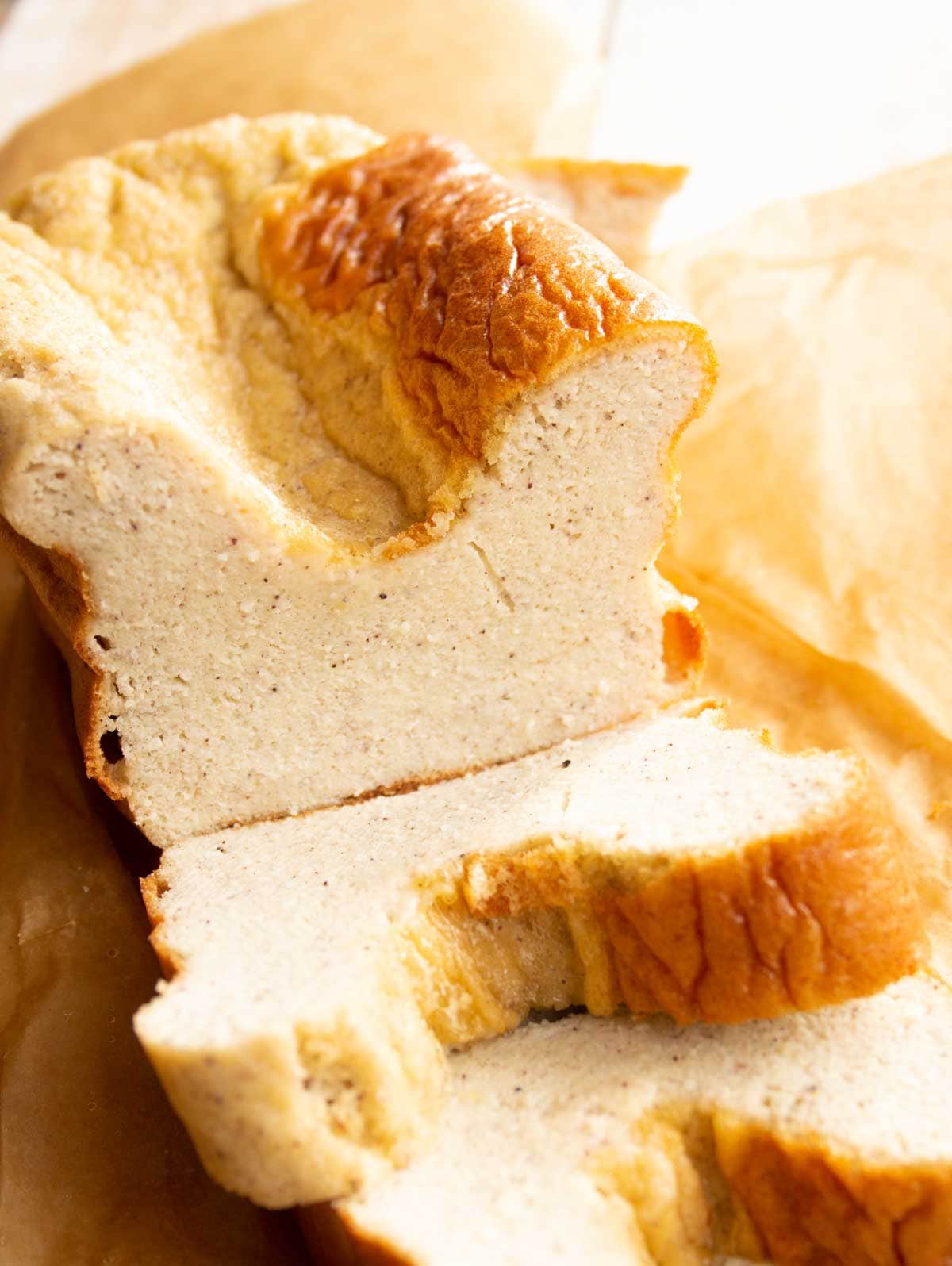 Regular readers of this blog will know that I have a passion for baking. That's why I just HAD to create my own version of the popular keto egg loaf. It's a high protein bread alternative that is VERY different to my regular low carb bread staples such as my Almond Flour Keto Bread or this Flaxseed Bread With Coconut Flour.

What is keto egg loaf?

Basically, it's a cream cheese pancake recipe that's cooked in a bread pan.

I tested a version of this, but found that the loaf collapsed into a dense heap straight after removing it from the oven. It tasted lovely, but had the texture of a flan or baked custard.

By adding coconut flour and baking powder I achieved a fluffier texture. And even though my keto egg loaf did still deflate as it cooled down, it retained a better shape. I like to think of it as sugar free French toast - eggy, creamy and soft in all the best ways. You get me?

How many carbs in Keto egg loaf

Since this keto loaf recipe only contains a very small amount of coconut flour, it is very low in carbs. The total carb count per portion is just 1.9 grams and one slice comes in at 1.3g net carbs. It is the perfect keto breakfast for anyone who wants to keep their carb count very low.

Of course, an egg loaf is not exactly comparable to regular low carb bread. The main ingredient in keto bread will be either nut or seed flours, and other ingredients such as eggs, butter or water play second fiddle. Keto bread really can pass as "proper" wheat bread.

For this recipe, the tables are turned. This is a high protein recipe where eggs take the centre stage. Where normally we'd try anything to get bread taste NOT eggy, here it is the entire point. Definitely serve this warm, slathered in sugar free syrup jut like a pancake. Or even better, fry it in butter and top with golden erythritol!

How to make keto egg loaf - step by step: 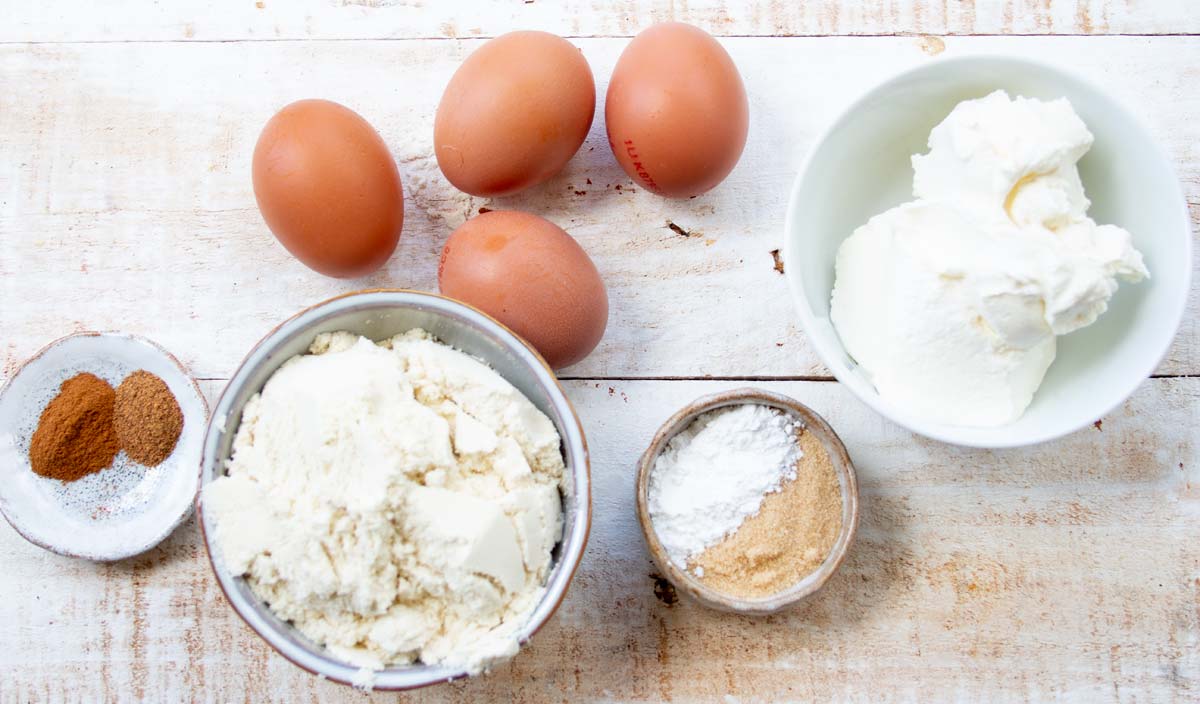 1.) Get your ingredients ready, pre-heat the oven to 350 F / 175 C electric and line a small loaf tin with parchment paper. 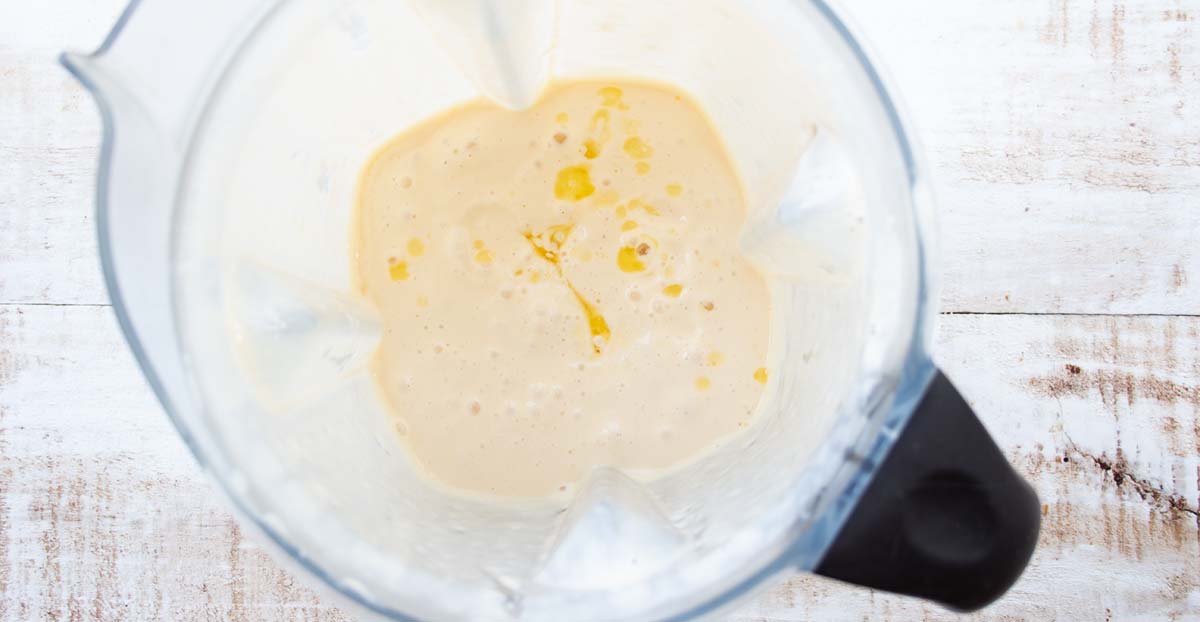 2.) Mix the eggs, cream cheese, butter and erythritol in a food processor or high speed blender until frothy. Alternatively, use a tall mixing jug and a handheld electric blender.

Then, add the rest of the ingredients and blitz briefly until combined. 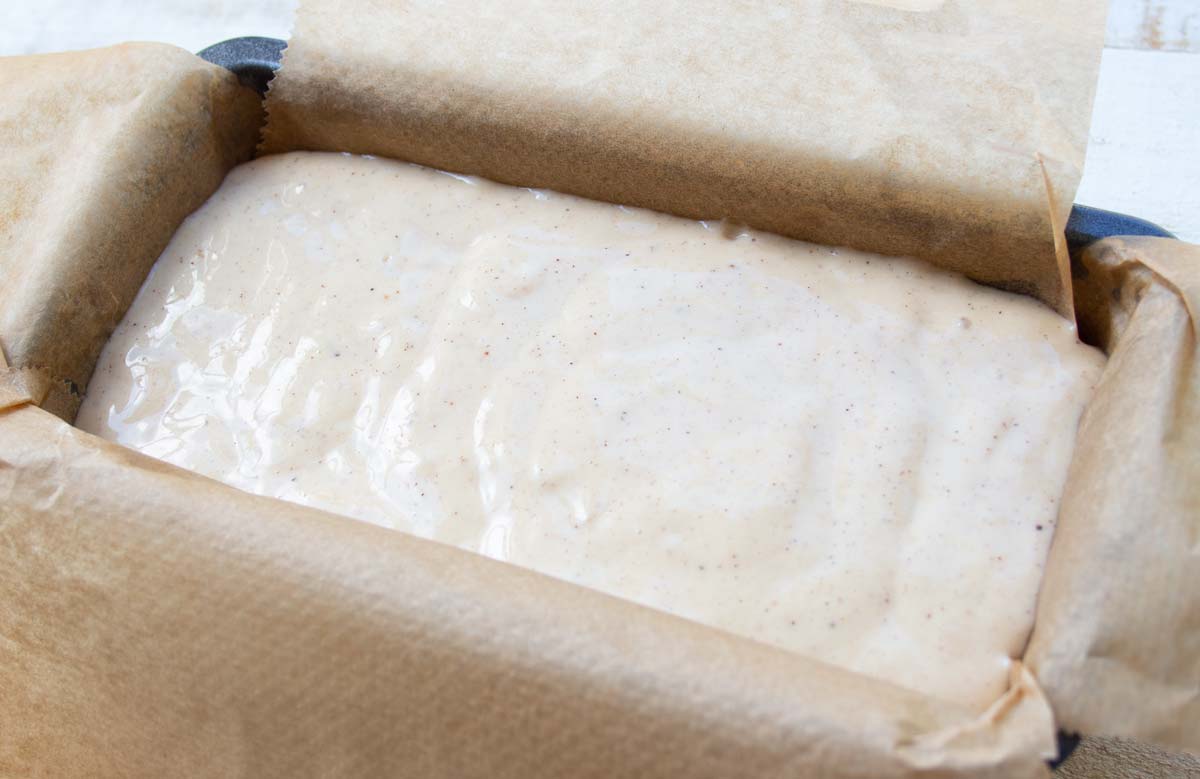 3.) Pour the mix into the prepared loaf tin and bake for 40-45 minutes or until a toothpick inserted comes out clean.

Tip: Check the keto loaf after 25 minutes. Once it is golden on top, cover it loosely with a sheet of aluminium paper to prevent excessive browning.

Can I prevent the egg loaf from sinking?

First of all, you need to know that this loaf is all about the taste. IT TASTES GREAT. I have not yet produced one that does not deflate at all.  However, I have a few suggestions and ideas that I will try next time I make it.

Firstly, slice it while still warm - as it cools down, the loaf continues to sink in the centre and thus changes the shape of each slice.

Secondly, next time I will bake it in a full sized bread pan as opposed to a small loaf pan. The loaf will turn out a lower, rectangular shape, which means the weight of the loaf is more evenly distributed (meaning wider rather than higher). I actually think this is such a good idea I'll write it into the recipe.

The next idea to try is to separate the eggs and beat the egg whites until stiff  like for a souffle, then fold them in at the end. It would be interesting to see if the air pockets created can hold up and create a lighter, larger loaf. Definitely use the large loaf pan if you try this out.

*** update September 2020 - a reader followed this suggestion and produced an egg loaf that held its shape. She showed me images and it looked PERFECT. ***

The last way to stop the loaf from deflating is to use 1 teaspoon of gelatine or agar agar. This could provide the staying power this loaf needs!

Think of this keto loaf as a mixture between a pancake and a slice of bread. It is best eaten warm / toasted and buttered generously. Here are some topping ideas that would work well:

snickerdoodle - pour over a mix of melted butter and cream, cinnamon & golden erythritol

drizzle with sugar free syrup and top with berries

My favourite way to eat this loaf is to turn it into Keto French toast.

Simply fry the slices in butter until golden brown and sprinkle over erythritol and cinnamon. Make sure you fry over a low heat as the egg loaf browns quickly. 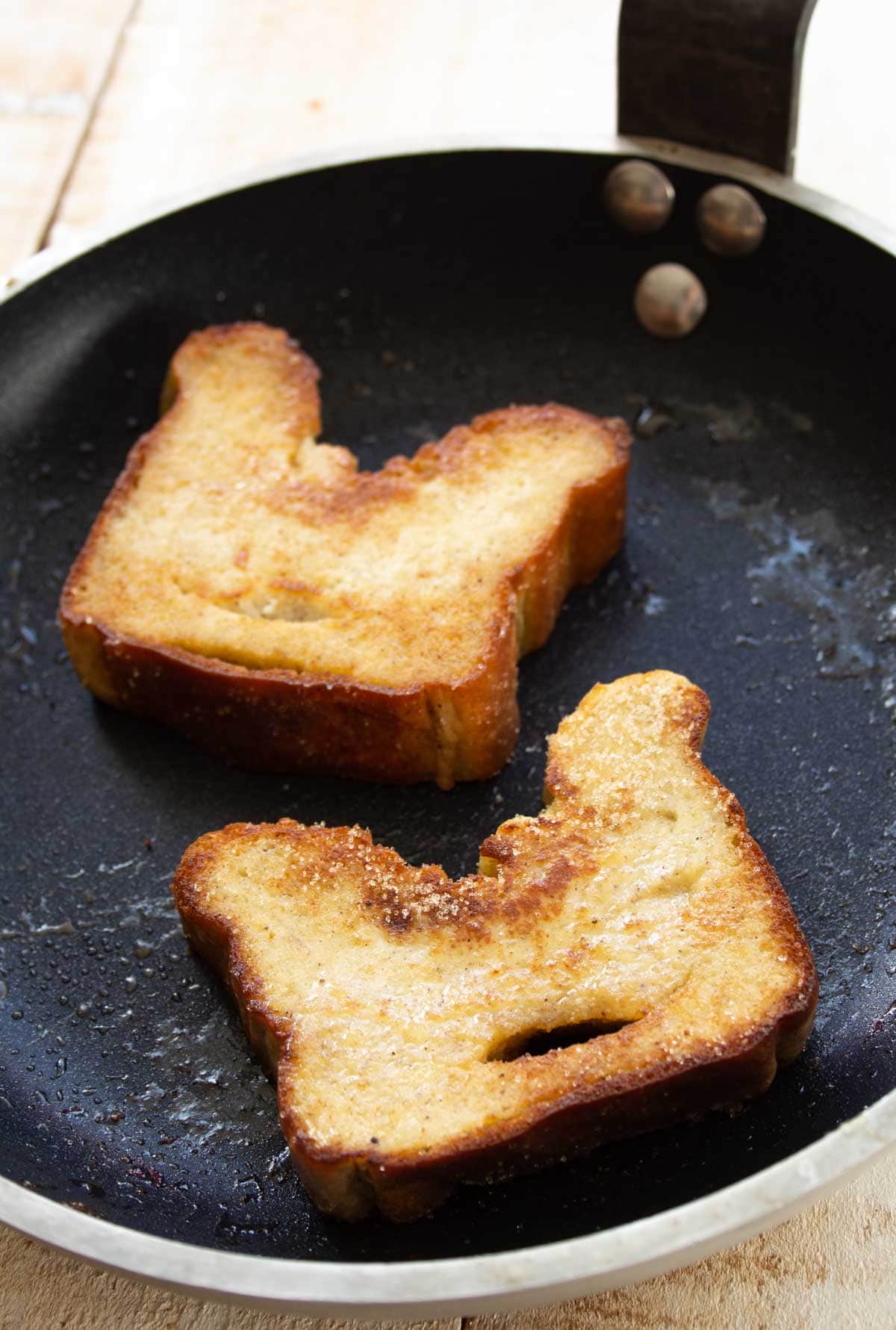 You can probably replace the coconut flour with about ½ cup / 50g of almond flour. Note that I have not tried this myself yet, but these amounts would be my starting point.

It may also be possible to replace the cream cheese with coconut cream and the butter with coconut oil for a dairy free egg loaf option. Again, if you decide to experiment, let me know the outcome in the comments!

If you're short on cinnamon and nutmeg, consider using vanilla extract instead.

You could even make a savoury keto egg loaf by omitting the cinnamon, sweetener and nutmeg and using a pinch of salt instead.

Or, why not add ¼ cup of grated cheddar and bacon or ham to the batter?

It's also worth considering baking the mix in a casserole dish and slicing it into squares. This way, you might solve the issue with the sinking middle as you'd end up more with a large pancake or frittata - whatever you want to call it!

How to store keto egg loaf

Store this "bread" in an airtight container in the fridge for up to 5 days.

You can also freeze it for up to 3 months. Pre-slice the egg loaf before freezing and pop into the toaster or microwave straight from frozen.

Some of my other low carb keto bread recipes: 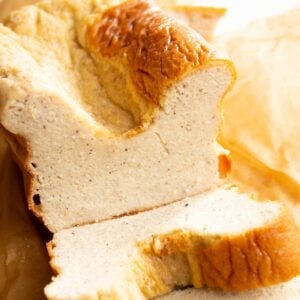 Net carbs: 1.3g per slice. 10 slices per keto egg loaf. Store in the fridge for up to 5 days. Tastes great fried in butter (a bit like French toast).  Freeze for up to 3 months. Freeze pre-sliced and place parchment paper between each slice to prevent sticking. I used a small bread loaf pan (450ml capacity). I think if you use a regular, full size bread loaf pan the loaf will sink less in the middle as it will be rectangular rather then a high bread shape.   *** update September 2020 - a reader followed the suggestion in the post to separate the eggs and whip the egg whites until stiff. She then folded the egg whites into the batter at the very end. This produced an egg loaf that held its shape and did not sink in the middle. She showed me images and it looked PERFECT. ***