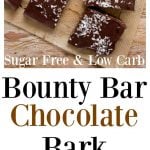 Dark chocolate with a soft and creamy coconut filling: You only need 5 ingredients for this sugar free, low carb Bounty Bar Chocolate Bark. 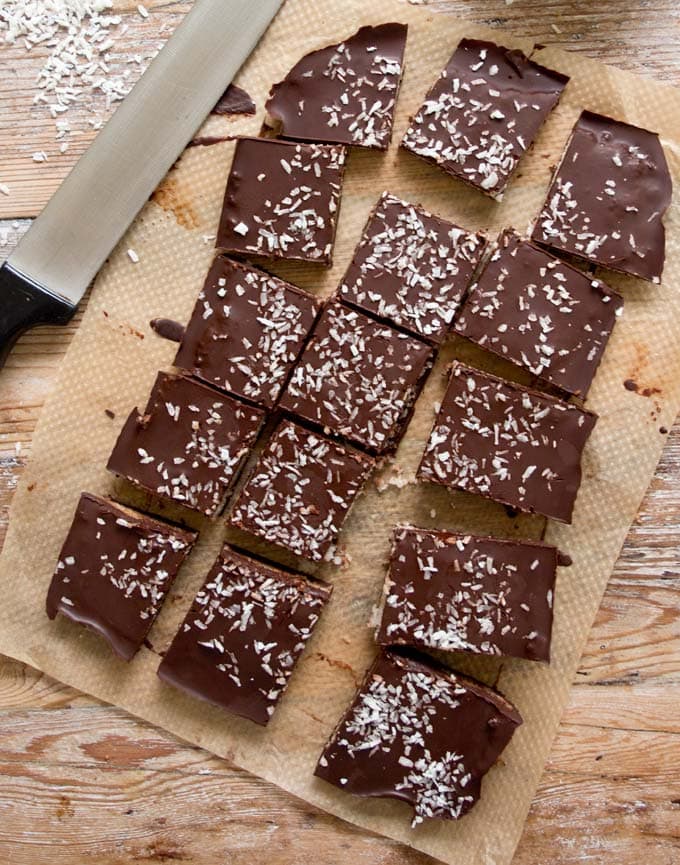 Let’s talk chocolate bars. Which one pushes your buttons?

When I was a kid, I used to love Bounty Bars.

Not only because I liked the taste of coconut (and I still do), but also because of the wrapper which I thought was just wonderfully exotic. Bounty Bars made me think of summer, sunshine, tropical islands and dancing Hula on the beach.

If you consider that the furthest away from Germany I had made it back then was Denmark, you’re basically talking paradise. 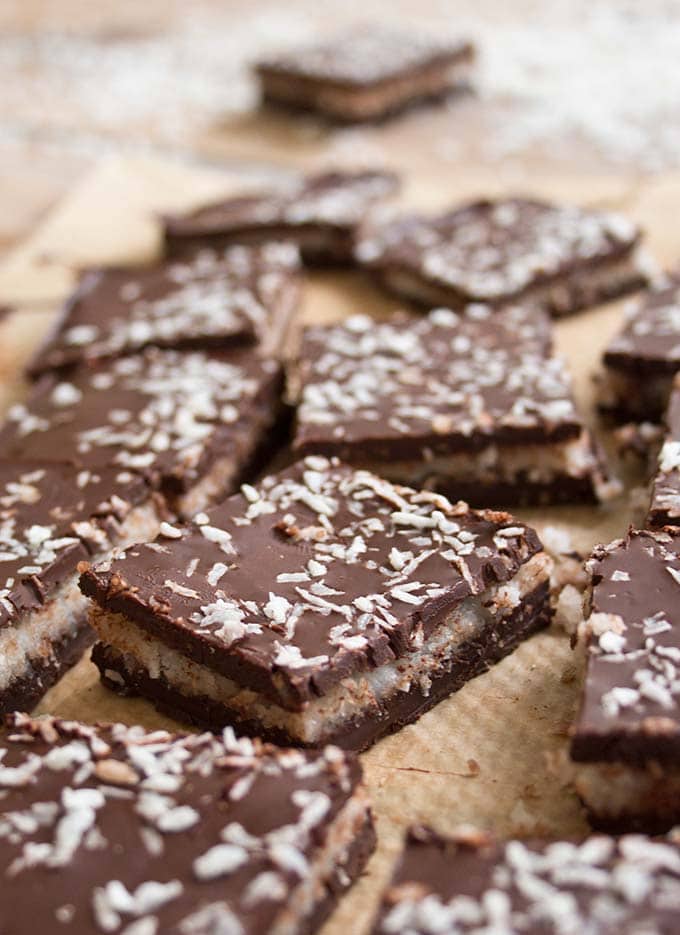 I haven’t had a Bounty Bar in yonks. But when I waited in the supermarket checkout queue the other day, there they were, in all their Pacific-blue glory. And even though I know they would probably taste like sweetened soap, I still kind of fancied one, for the sake of old sweet memories.

Alas, then I had a much better idea. I’d just make my own sugar free Bounty Bars.

And then I had an idea I liked even more.

I’d make the lazy cheat’s version of Bounty Bars. The one that does not involve laborious dipping of coconut shapes into melted chocolate. 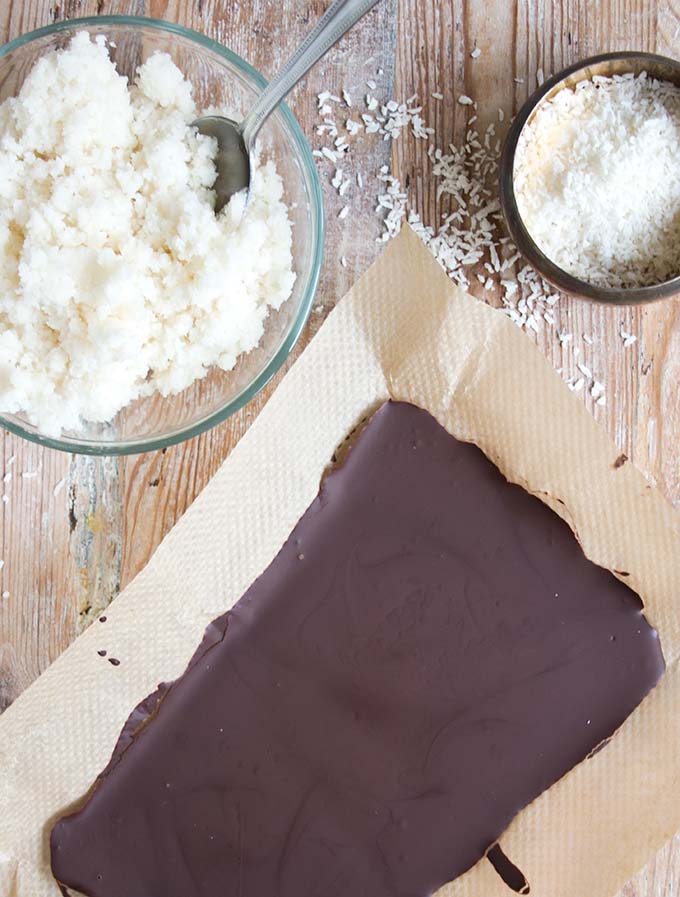 Bounty Bar Chocolate Bark is not only just THE most delicious sweet treat ever, it’s also SO EASY to make. All you need are 5 ingredients, a lil’ bit of patience (while your bark cools and firms up in the fridge) and a TEENY TINY bit of willpower to not scoff all of it in one sitting.

So. Let’s get down to the nitty-gritty and talk recipe. 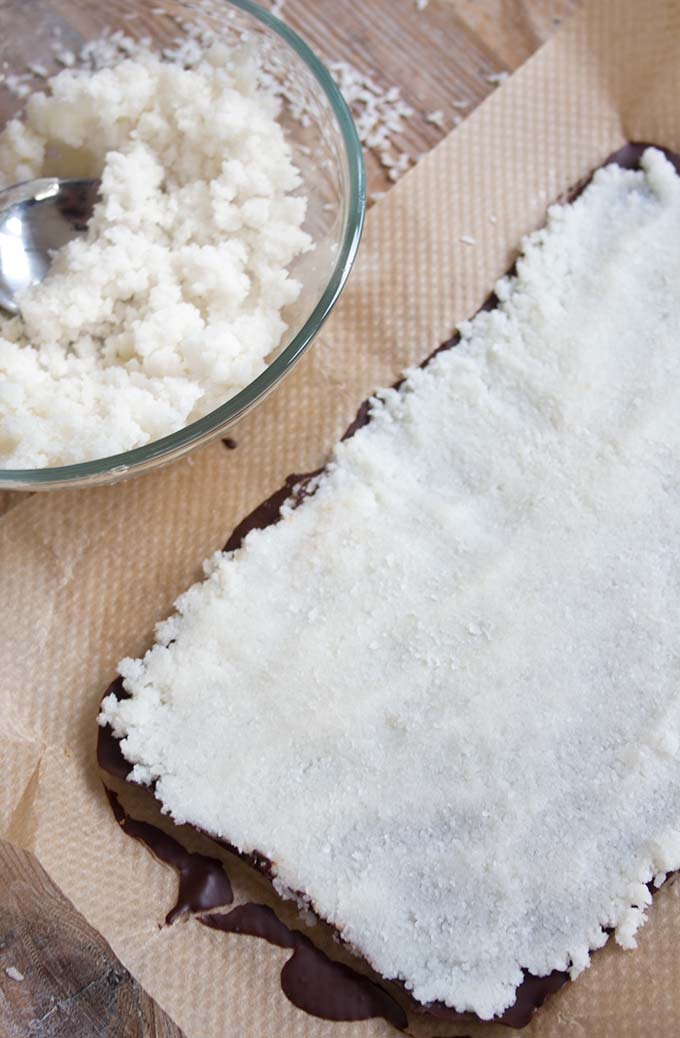 I used 100% unsweetened chocolate, which I sweetened with liquid stevia. OMG what a taste EXPLOSION! My current favourite is caramel-flavoured stevia, because I think it tastes great, but regular stevia would do the trick, too. You could also use powdered erythritol to sweeten.

Granulated sweetener is not a good idea because it would too heavy and sink to the bottom of your chocolate layer. 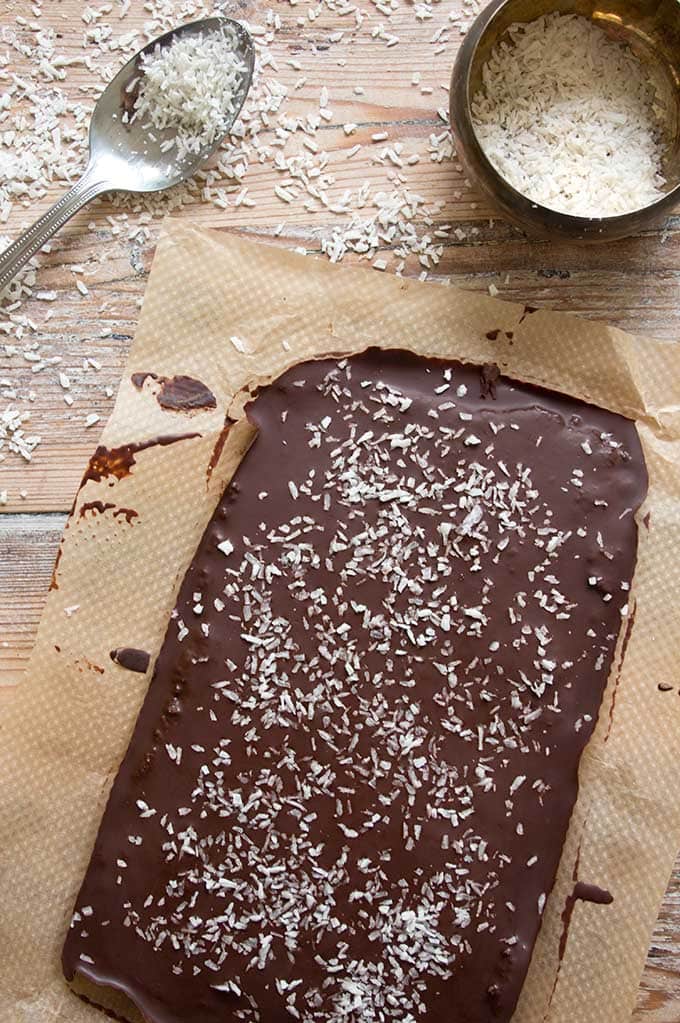 Tastes amazing and is fantastically healthy. Make sure you buy unsweetened coconut and not the sweetened version. This is what I did accidentally – a super-sized packet, no less – and almost choked on when I tasted my mix. Guys, 1/3 was icing sugar. It literally made my teeth curl.

Hard to say if I’d have found this yum before I went sugar free. Coconut has quite a bit of natural sweetness, so you don’t actually need oodles of sweetener.

One long word: Medium-Chain Triglycerides!! These superstar fatty acids have antibacterial and antiviral properties, support your immune system and are heart-healthy. Coconut cream and coconut oil help make the filling taste just as creamy, rich and irresistible as the filling of the original Bounty Bar – only better :).

I used the firm part of a can of coconut milk. The leftovers and the liquid part went into a red curry with cauliflower rice later that day.

Just a little bit of patience…. until the chocolate has fully firmed up in the fridge. Catch up on news, tidy up your eyebrows, have a nap… do ANYTHING to not touch your bark before it’s hardened properly, especially if you plan to break it into generous Ottolenghi-like pieces as opposed to cutting it.

I have to admit, it’s difficult, and my bark sported a couple of telltale fingerprints after I wielded my knife. Can you tell in the photo below? 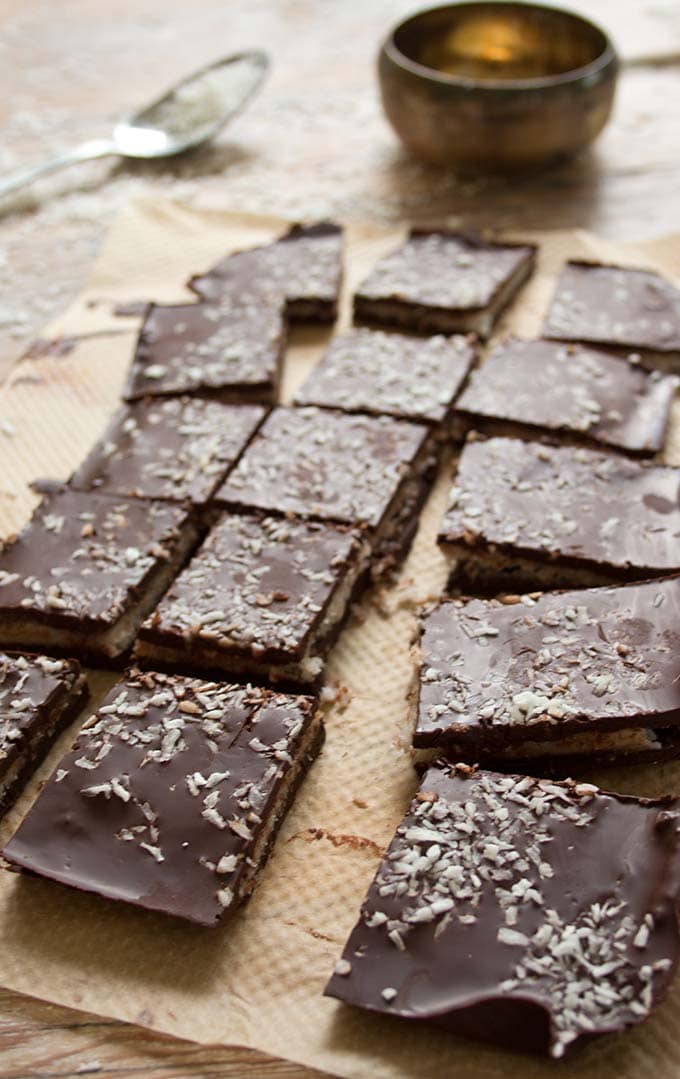 Note: I cut my Bounty Bar Chocolate Bark into 15 pieces, which actually were rather generous in size. You could easily cut it into 20 pieces and still feel satisfied, especially if you are using 100% unsweetened chocolate which has a very intense taste.

★ Tried this recipe? Give it a star rating below!★ 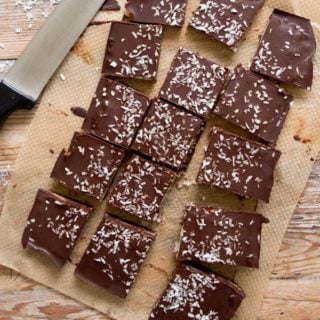 I had around half of the coconut filling left over, but decided not to change the recipe because it would be tricky to blend only a tiny amount in a food processor. You could make little bliss balls and roll them in cocoa powder, for example. Or use more than half the filling and make your bark more coconutty - I think this is what I'll do next time. I calculated the nutrition facts with half the coconut filling. If you wanted, you could also make "proper" low carb Bounty Bars instead of bark - just form little bars and dip in chocolate instead! In this case, 100g/3.5 oz of chocolate would suffice I used 100% unsweetened chocolate - I discovered a brand called Montezuma at my local Sainsbury's. Sweeten it to your liking with liquid stevia - I used this caramel-flavoured one. You could also use ready-made sugar free chocolate. In the US, Lily's is a good option.

Hello, I'm Katrin! I love living in London, dreaming about Ibiza and creating tasty and simple recipes without added sugar. All my dishes are low carb, gluten free and use natural ingredients. Sign up for my NEWSLETTER and never miss a recipe!

1.5Kshares
Secured By miniOrange
SUCCESS! Watch your inbox for your free guide.