Research shows that sugar, not fat, is to be blamed for making us fat, messing up our metabolisms and raising our blood pressure. Yet we all want to enjoy dessert. As artificial sweeteners are off the menu - aspartame and co have been linked to cancer - let's take a look at natural sugar alternatives.

I have scoured the web for essential info on which natural sweeteners to use and why and found many answers on the website Healthline. Here are the good, the better and the best:

Native to South American, the stevia leaf is 40 times sweeter than sugar. The commercially processed stevia that is readily available in the shops can be up to 300 times sweeter.

Stevia has been used as a sweetener for over 1500 years in South America, and in Japan, makes up 41 per cent of the sweetener market.

It has no calories and no glycemic impact making it suitable for diabetics as well as anyone watching their sugar intake. It can, however, have a slightly metallic aftertaste.

That's why I tend to use only very little of it in my recipes, often in conjunction with fruit, like in this Chocolate Avocado Mousse.

The name rings a bell? That’s because it is an ingredient in many sugar free chewing gums.

Xylitol is a five-carbon sugar (five carbon atoms in the molecule) unlike most other sugars, which have six. This small difference means it helps prevent the growth of bacteria, so it actually protects your teeth.

A sugar alcohol with a low GI of 7, it is found in birch trees and in the fibres of many fruits and vegetables. Xylitol has all the sweetness of common sugars yet 40 percent fewer calories and 75 percent less carbohydrates.

When you buy it, make sure you choose a brand which does manufacture it out of birch trees. There are cheap brands around which use GM-corn from China instead. I like it because it tastes pretty much like sugar.

Try out the Low Carb Waffles or the Strawberry Coconut Mousse.

Erythritol is a sugar alcohol (no worries, it does not get you drunk, that's ethanol). It does not raise our blood sugar levels and only has 6% of the calories of sugar (0.24 pro gram) whilst delivering roughly ⅔ of the sweetness.

It occurs naturally in some fruits and fermented foods, but the kind you can buy is man-made through the fermentation of natural sugar found in cornstarch. Our bodies do not have the ability to break it down, so it simply passes through our system. It has virtually no aftertaste, looks just like sugar and is great in baking.

You can grind erythritol into a very fine powder that resembles icing sugar. This helps to distribute the sweetness more evenly in raw recipes as it does not dissolve as easily as sugar.

Coconut sugar has a low score on the glycemic index, which means you don’t get a buzz followed by a crash, and contains antioxidants and vitamins. It tastes similar to brown sugar but is slightly richer.

Once tapped for sap, the trees can go on producing for 20 years and yield more sugar per hectare than sugar cane and benefit the local soil.

However, coconut sugar has almost the same amount of fructose than sugar and around same amount of calories. Which ultimately makes it a teeny tiny bit better than sugar, but definitely not something you should eat every day!

Sweeter than sugar, get raw honey that’s been organically and locally produced to reap the full benefits (unrefined honey contains vitamins and has antimicrobial properties).

The heavily processed cheap supermarket brands have none of these benefits - they are no more than liquid sugar. Maple syrup is made is made from the boiled sap of maple trees and contains plenty of antioxidants. It is lower in calories than honey but more expensive.

At the end of the day though, honey and maple syrup both are simply a “less bad” sweetener than sugar.

Harvested from the spiky, cactus-like South American plant, it is 1.5 times sweeter than sugar and has a low GI so it does not cause energy spikes.

However, many dieticians say it is even worse than sugar. The reason? Agave contains around 85 % fructose, while normal table sugar only contains 50%.

Fructose can only be metabolised by the liver and, in large quantities, is converted into fat and can lead to insulin resistance and ultimately, diabetes.

Made from boiling brown rice, the syrup is gluten and wheat free and has a slightly butterscotch flavour to it. It is 100% glucose, which, unlike fructose, can be metabolised by every cell in the body.

However, it has a very high glycemic index (98) so causes a rapid blood sugar high. At the same time, it is less sweet than sugar and has more calories.

Dates and other Dried Fruit

Dried fruit is great for adding natural sweetness to food. They are, however, very high in calories and sugar, including both glucose and fructose. This is because the water has been removed from the fruit and all the sugar and calories are concentrated.

Here are some examples of the natural sugar content of dried fruit:

Especially dates are incredibly sweet and therefore very popular in dessert recipes, both raw and baked.

They are nutritious: a great source of fibre, potassium, iron and antioxidants. They also have a reasonably low glycemic index, which means that eating them should not cause major spikes in blood sugar levels.

I do not eat dried fruit as a snack on its own - but in small amounts and along with other nutritious foods, they can be a good alternative to table sugar. They are however unsuitable on a low-carb diet.

The bottom line is this: The best way to approach natural sugar alternatives is to limit your intake of sweets altogether and move towards a savoury frame of mind.

Even with a zero calorie sweetener like stevia there is a catch: They may mess up your appetite-regulating hormones.

This is because the brain is fooled into thinking energy (i.e. sugar) is on the way, and when those calories do not appear, we end up feeling hungry and crave more.

Exactly how much you want to reduce your sweets intake depends on what feels reasonable and right to you. To me, a nice dessert around once a week feels balanced.

As I have written in my article about desserts, this could be sweetened with fruit, with stevia or xylitol, or even with real, bad-ass sugar (in my case, usually made by someone else).

As you reduce your sugar intake, you'll find you prefer your sweets less sweet anyway - and you won't want to gobble yourself through that gigantic piece of death by chocolate cake.

On this website I only post desserts made either with fruit or with stevia, xylitol or erythritol because I want to show you that you can make delicious morsels without sending your blood sugar sky-high.

Try some out and enjoy. 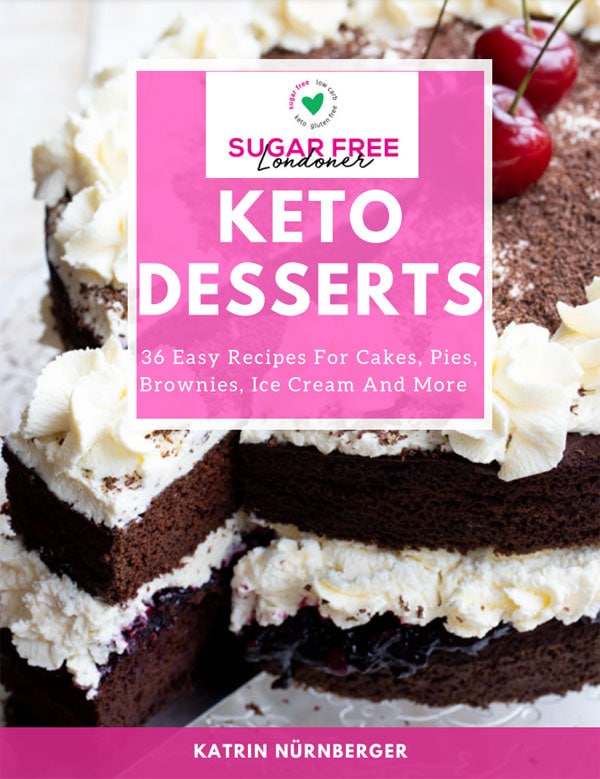 OUT NOW! The Zero Guilt Keto Desserts CookbookTAKE ME THERE
SUCCESS! Watch your inbox for your free bonus email.

x
I Want This!
Invalid email address
Thanks for subscribing! Please check your email for further instructions.
SUCCESS! Watch your inbox for your free bonus email.