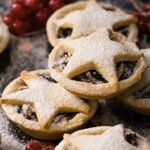 A proper British Christmas isn't complete without a good mince pie. These keto sugar free mince pies are buttery and fruity but without all the carbs and sugar of the store-bought versions. You can happily enjoy one… or two!
Jump to Recipe Cookbooks Meal Plan
1548 shares 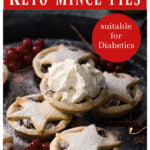 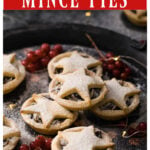 With a buttery, flaky almond flour shortcrust pastry and a low carb mincemeat filling, these Keto mince pies are the essence of a proper low carb Christmas!

My whole family LOVES mince pies. Especially my daughter goes crazy for them. As soon as they appear in the shops, she'll use her pocket money to buy a pack here and there, trying to figure out which one is the best.

I get it. Mince pies do taste great. The combination of the sticky dried fruit and the Christmas spices in the mincemeat and the buttery, flaky shortcrust pastry is quite irresistible.

However, the amount of sugar and carbs a supermarket mince pie contains is eye-watering, however little they are. One Waitrose Christmas Mince pie comes in at 36 grams of net carbs and 16 grams of sugar (that's equivalent to 4 teaspoons of table sugar)!

My kids buy what they want with their pocket money, but I did point out the different sugars in the last lot of mince pies she schlepped home. On top of the apple puree and the sultanas, raisins and currants which contain plenty of fructose all on their own, there was added sugar, glucose syrup and glucose-fructose syrup.

SO. How can you follow a keto diet or low carb diet AND enjoy mince pies? After all, they are one of the essential Christmas recipes in the UK, alongside Christmas pudding. I have had this sugar free Christmas pudding recipe on my website for years, and it has a loyal following.

It was time for a healthy mince pie recipe!

When you keto-fy a recipe, you often need to come up with creative substitutions and keep an open mind. Meaning, these gluten free keto mince pies do not EXACTLY taste like regular mince pies. I'd say they are a touch fruitier.

But they contain all the same spices and textures we love about mince pies.

Let's get into the nitty- gritty. What's the secret ingredient of these diabetic mince pies? Dried fruit such as raisins or sultanas contain WAY too much sugar to make it into a keto dessert, whether it's December, Christmas or not.

Easy - I replaced them with homemade sugar free dried cranberries.

My dried cranberries are sweetened with allulose (you can use powdered erythritol instead). They are super juicy and at 1.4g net carbs per tablespoon a fraction of sugary mincemeat!

Check out the ingredients for this healthy mince pie recipe in the image below:

How to make keto mince pies

Place everything except the brandy and almonds in a saucepan and simmer on a low heat for about 5 minutes until quite thick but with just a little moisture left.

Option to press with a fork if you want less chunky apple. Stir through almonds and optional brandy and allow to cool.

Note - I used golden erythritol for the filling because I like the caramel flavour. Any sweetener will work though.

Shape the shortcrust dough into a ball and wrap in cling film. Chill in the freezer for 20 minutes.

NOTE: If the dough becomes too warm to cut out at any point, simply place it back in the freezer for 5 - 10 minutes to firm up.

Now you assemble the mince pies! Grease a shallow muffin baking tray with butter and add a base. Add mincemeat (approx 1 tbsp per mince pie)...

... and then your pastry lid!. Press to seal slightly and brush with egg wash. And off into the oven they go, for about 18 minutes.

Important: Don't attempt to remove your lovely little sugar free Christmas mince pies from baking tray until they are fully cooled! They are fragile while hot and firm up as they cool.

These mince pies are perfect all on their own dusted with powdered sweetener.

But to take it up a notch, why not serve them with sugar free custard or low carb vanilla ice cream?

Lovers of a classic mince pie experience may enjoy eating them with keto brandy butter (that's hard sauce in the US).

Or serve them like me with a dollop of whipped double cream!

How to lower the net carbs further

I wanted to stay close(-ish) to the original recipe - that's why I used apple in the filling. However, to reduce this recipe from 6g to 4.4g net carbs per mince pie, swap the apple out with zucchini.

Use 1 ¼ cups / 150g chopped zucchini (peel and core them before chopping.) Also, increase the sweetener to taste as you're now missing the natural sweetness of the apple.

Can you make low carb mince pies with coconut flour?

Every time I make a recipe with almond flour or grounds almonds, some readers want to know how to make the dough nut free.

You can either use a mix of sunflower seed flour and sesame seed flour - this is a 1:1 substitution with the almond flour.

Or you make a pastry using only coconut flour. I recommend the coconut flour pie base for this Strawberry Mascarpone Tart. It works well and is sturdy!

I stored my mince pies in a closed container in the fridge for 3 days and reheated them in the microwave before eating.

They are probably fine for 1-2 days at room temperature as well.

I did not try to freeze them, but it should work (up to 3 months). You may want to reheat them in the oven to ensure the shortcrust stays nice and crisp.

And just in case you're wondering - my daughter gave these healthy mince pies the thumbs up! 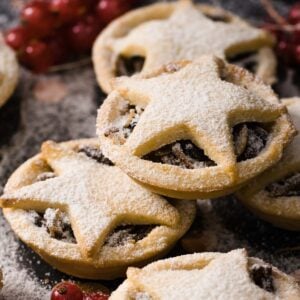 6g net carbs per mince pie. Makes 8 sugar free mince pies @ 60 g each.  To reduce this recipe to 4.4g net carbs per mince pie, swap the apple out with zucchini. Use 1 ¼ cups / 150g chopped zucchini (peel and core them before chopping.) Also, increase the sweetener as you're now missing the natural sweetness of the apple.  Important: Don't attempt to remove your keto mince pies from baking tray until they are fully cooled! They are fragile while hot and firm up as they cool.   Storage: Tupperware in the fridge for up to 3 days.