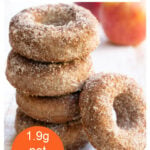 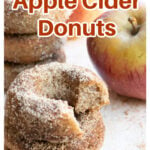 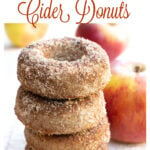 These keto apple cider donuts are packed with apple flavor! They are a delicious and simple autumn treat that the whole family will love - whether they are following a keto diet or not. Even better, one donut contains just 1.9g net carbs.

After I posted this keto apple cake a couple of weeks ago, I realised that I just do not have enough apple recipes on my website. It was time to rectify this - with these very delicious gluten free apple cider donuts!

Wait a second. Did I just hear someone shout: "But Katrin, apples are not keto"?

The answer is, it depends on the amount.

Apples contain a fair amount of carbs. However, keto is a metabolic state, not a food. And as long as you eat higher carb foods such as apples in moderation, they can be part of a keto diet.

I make my unsweetened apple sauce every autumn, and we all love these low carb apple cinnamon granola bars.

Some people like to replace apples with flavouring. And that's totally fine, if that's your thing. However, I prefer to use real apples to get an apple flavor that tastes, well, real. Also, let's be honest, how often are you going to use a bottle with apple extract? It's just not as versatile as vanilla extract!

This keto donut recipe contains one apple weighing 125 grams, which is spread over 16 mini donuts.

Therefore, each donut comes in at a super low 1.9g net carbs.

I'm not a fan of apple cider because firstly I think it tastes of apple juice that's gone off, and secondly because it contains tons of sugar. Therefore, I replaced the cider with an apple (as mentioned above), and - apple cider vinegar!

I am super pleased with the flavour of these sugar free donuts. Plus, they have a wonderfully moist yet fluffy texture. Let's take a look at the ingredients:

Start by peeling the apple and chopping it into small pieces. Then, put the chopped apple in a bowl, cover and cook in a microwave until soft (mine took 4 minutes at 900W). Alternatively, simmer on the stove with a splash of water until very soft.

With the apples prepared, let's get going: In a food processor or high speed blender, blend the eggs until fluffy, pale in colour and double the size.

Grease a silicone donut pan and fill in the batter. Don't over-fill or you'll lose the hole! Bake for 14 minutes.

Let the donuts cool completely before removing from the pan.

Mix together the "cinnamon sugar" mixture. Brush the donuts lightly with melted butter and roll in the mixture until coated all over.

Get a good rise: Always use fresh baking powder and room temperature ingredients in keto baking recipes. And take your time when beating eggs to get as much air into them as possible.

Which donut pan is best? I would strongly recommend to use a silicone donut pan for this recipe. It's much easier to release the donuts than from a regular pan.

No donut pan: Simply use a muffin pan! Depending on the size, increase the oven time accordingly. Test with a skewer to see when they're done. Full sized muffins normally take 25 minutes.

Make it nut free: Try replacing the almond flour with a mix of sesame flour and sunflower seed flour.

Make it dairy free: Use coconut oil instead of butter.

Can I use apple extract?

You can totally use 1 teaspoon of natural apple extract (amazon US aff link) in this recipe. However, this would not REPLACE the apple, which you need for moisture as well as flavour. The apple extract would need to be used in addition to the apple.

Can I use raw apple?

I made a version with raw grated apple. Because this adds more moisture to the batter, you'd have to increase the almond flour by 25 grams or ¼ cup. The result is more rustic as you'll have small apple pieces in the low carb donuts.

All low carb donuts keep well on the counter for about 5 days, and that includes keto apple cider donuts. I store them in a cookie jar. There's no need to store them in the fridge.

It's possible to freeze them, too! Put them in a ziplock bag and freeze for up to 3 months.

If you have a donut pan, you've got to use it, right? Here are my other low carb donut recipes:

These sugar free donuts are just 1g net carbs each! 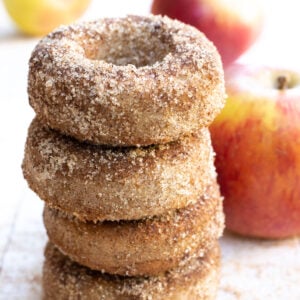 Net carbs: 1.9g per donut. Makes 16 donuts. Optional add-ons to the cinnamon (optional but recommended):  ***I started out with 125 grams of apple and ended up with 90 grams after microwaving. *** Additional step if you DON'T have a high speed blender: Puree the cooked apples before adding them to the batter. This way you ensure that you have a smooth batter without apple bits.  I used this silicone donut mould.