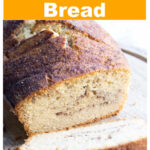 This fluffy keto cinnamon bread is a delicious sweet breakfast or snack. It is a gluten free almond flour bread with only 2.2g net carbs per slice.

Who else thinks that a sweet bread for breakfast is wonderfully decadent?

My entire family loved the fluffy and light vanilla flavoured crumb of this bread. It's like an extra light pound cake with a lush cinnamon swirl.

Seriously, I considered hiding it from the teenagers because they kept on coming back for seconds!

💕 Why you'll love it

It is hard to believe that something as delicious as this bread can actually be considered good for you.

Well, that's the great thing about a low carb diet.

This recipe is indeed a perfectly healthy breakfast choice. It is sugar free and low in carbs - in fact, only 2.2 grams of net carbs per slice.

In addition, it's high in protein thanks to the eggs and protein powder and comes in at only 2.2g net carbs per slice.

Here are the ingredients you need to make a keto cinnamon bread:

Almond flour - I'm using what we here in the UK call ground almonds. This is equivalent to regular almond flour in the US and coarser than super fine almond flour.

If you want to use super-fine almond flour in your low carb bread, reduce the amount to 2 cups or 200 grams because the fine flour soaks up more liquid.

Eggs - Use large eggs and beat them as directed to get as much air into them as possible for a lighter bread. Also, make sure they are room temperature.

Butter - The butter should be melted and then cooled. If it's too hot it could end up cooking your eggs!

Almond milk - I love Plenish almond milk, which is unsweetened. Using milk over cream keeps the keto cinnamon bread lighter than a full-on cake and just perfect for breakfast.

Sweetener - I used a "brown sugar" erythritol blend here because it goes well with the cinnamon. However, a white granulated sugar substitute will also work. Xylitol or allulose or Splenda is also an option.

First, beat the eggs in a large mixing bowl until frothy and doubled in size. Then, add the wet ingredients and after that the dry ingredients.

Now stir together the cinnamon sugar for the filling.

Bounce the loaf pan onto the kitchen counter a few times so the batter settles evenly. Then spread the remainder of the cinnamon mix on top of the cake.

Stick a knife inside the batter and swirl it up and down lengthways and then from side to side, moving from one end of the pan to the other. This creates the marble effect.

Pound the pan gently on the counter again and then bake in the oven for 55 minutes or until a skewer inserted comes out clean.

Check the cinnamon swirl bread after 35-40 minutes. If it is already browned sufficiently, loosely place a piece of aluminium foil over the top to stop it from burning.

I encourage you to measure the flours - and especially the coconut flour - in grams. This is much more exact than using cups. Coconut flour expands a lot and if you pack your cup you may end up with a lot more than you intended. This can lead to a dry batter.

If you don't have scales, sift the coconut flour into the cup and level it.

The consistency of your batter should be thick but not as firm as cookie batter. Check the images for reference. If your batter ends up too dry, loosen it with another tablespoon of almond milk or an additional tablespoon of butter.

I have not yet tried making this cinnamon keto bread with JUST almond flour or without protein powder. If you want to try, I recommend these substitutions. Do check that the batter consistency mirrors mine and make adjustments if necessary!

To make a dairy free bread, replace the butter with coconut oil and use egg white protein instead of the whey.

For a change, you could add a handful of crushed pecans or walnuts to the cinnamon swirl. Option to also add a pinch of salt

Or make a simple vanilla glaze to top the cake with! The coconut butter drizzle from my Keto Lemon Pound Cake works perfect here.

Refrigerator: Store your keto cinnamon bread just like you would any other bread - in an airtight container at room temperature for about 4 days or in the fridge for up to 6 days.

Freezer: Slice and freeze for up to 6 months.

To reheat: If frozen, thaw in the fridge or on the kitchen counter. Gently reheat in the microwave on a low powder level.

2.2g net carbs per slice. Makes 14 slices.  ***I used ground almonds, which is equivalent to regular almond flour in the US. If you're using extra fine almond flour, reduce the amount of flour to 2 cups / 200g.  Store in an airtight container for about 4 days (fridge up to 6 days) or freeze for up to 6 months.

SUCCESS! Watch your inbox for your free bonus email.