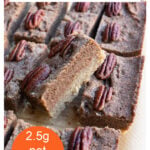 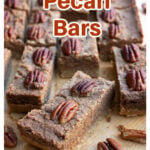 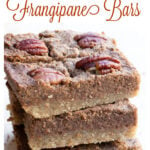 Try these easy keto pecan pie bars with a French twist! They have an almond flour shortbread crust and a deliciously soft pecan frangipane filling. Topped with pecan halves, you're getting all flavours we love in a proper pecan pie at a fraction of the carbs.

I'm all about Thanksgiving recipes at the moment! Last week I made my sugar free pumpkin pie, and after that a proper Keto Pecan Pie. I served it to American friends and it got the thumbs up all round. They even took down the recipe to make it again at Thanksgiving!

Today I came up with these keto pecan bars. I called them keto pecan pie bars because they have all the pecan pie flavours - buttery, nutty and sweet... but with a French twist.

You see, instead of simply topping the pie crust with pecan halves and a sugar free syrup or caramel, I made a sugar free pecan frangipane.

Frangipane is a traditional French pastry cream. It contains ground almonds, butter, egg and sugar. Here, I have replaced the almonds with pecans and used a sugar free sweetener instead of sugar.

These sugar-free pecan pie bars are sweet and buttery and have a wonderfully soft texture.

And did I tell you they are only 2.5g net carbs per bar?

Let's take a look at the ingredients:

See? Very straight forward! I like almond extract here, but you could also use vanilla extract. The cinnamon and salt both give extra flavour.

Let's get started with our low carb pecan pie bars. First, you'll want to preheat the oven and line a rectangular baking dish with parchment paper.

Step 1: Place the flour, sweetener and salt in the food processor and pulse briefly.

Step 2: Add the butter and egg and blend until the mixture forms a ball. Alternatively, stir together with a fork in a bowl, then knead until a smooth dough.

Step 3: Press the dough into the cake pan with your hands. Option to roll it out between two sheets of parchment paper and have it thinner, reaching up the sides of the pan like a pie.

Step 4: Brown the butter in a saucepan over medium heat until golden, stirring continuously. Let it cool to lukewarm.

Step 5: Next, blend the pecans in a food processor to a flour. Add the cooled butter, sweetener, egg and egg yolk, vanilla extract and cinnamon and mix until well-combined.

Step 6: Add the filling on top of the crust and smoothen with the back of a spoon or a spatula.

Step 7: Last, top with pecan halves and bake for circa 30 minutes or until browned. You want the top to be firm, but the inside to be still jiggly.

Can I pre-bake the crust?

It's possible to pre-bake the crust for 12 minutes if you want it extra crisp. I've omitted this step because I wanted to keep the recipe as simple as possible.

Do I have to brown the butter?

I made a test without browning the butter. It works as well. However, I really liked the additional flavor from the browned butter.

Which sugar substitutes are best for this recipe?

I think allulose is the best sweetener for this recipe. It melts just like sugar and does not re-crystallise.
Alternatively, you could also use a brown sugar substitute such as Swerve, erythritol or a monk fruit sweetener (powder it first in a high speed blender).
Another option would be sugar free maple syrup. Lakanto makes a good one.

Can I use coconut flour instead?

No, this would change the recipe too much.

This keto pecan bar recipe is very fragile straight out of the oven. Let it cool completely before cutting!

Get it ready for Christmas: On top of the cinnamon, also add ½ teaspoon ginger, ½ teaspoon nutmeg, ¼ teaspoon allspice and a pinch of cloves.

More pecan flavor: Sub half the almond flour in the base for pecan flour.

Make it dairy-free: For a dairy free version, swap out the butter for coconut oil.

Add a streusel topping: Hold back ⅓ of the base mix. Make a thinner crust with ⅔ of the mix (it'll still be plenty) and crumble the rest on top of the frangipane filling.

Add a caramel sauce: Make a batch of my Keto Caramel Sauce. Add the pecan halves for the topping and stir, then add on top of the bars.

Refrigerator: Keto Pecan Pie bars are fine at room temperature for a day or two. I always prefer to store them in the fridge - for up to 6 days.

Freezer: Alternatively, freeze for up to 3 months. Thaw overnight. 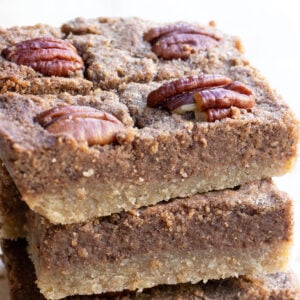 Net carbs: 2.5g per slice. Makes 12 slices.  These bars are filling. Option to cut into 24 squares and serve as a smaller sweet.  Since the frangipane filling is sweet, I did not add any sweetener to the pie crust. Add 2 tablespoons of sweetener to the crust if you prefer.   Note: It's possible to pre-bake the crust for 12 minutes if you want it extra crisp. I've omitted this step because I wanted to keep the recipe as simple as possible. Store in the fridge for up to 6 days or freeze for up to 3 months.

Hi, I'm Katrin! Since 2015, I have created and published hundreds of tasty sugar free and keto recipes on my website and in my e-cookbooks. I reclaimed my health by following a low carb diet, and so can you.