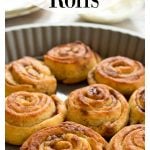 These keto cinnamon rolls are the ultimate comfort food. They taste so good it's hard to believe they are sugar free, grain free, gluten free and come in at only 1.3 net carbs per roll!

How much do I love cinnamon rolls?

Why I love this recipe

This beautiful warm smell of cinnamon and baked goodness that fills the house and wraps itself around you like a fluffy warm duvet.

Smelling cinnamon rolls releases my happy hormones, just like stroking kittens does, or sleeping in during the week.

Can it be that the swirl in a cinnamon roll has hypnotic properties? Think about it. Remember how Kaa the snake from the Jungle Book did this swirly-eye-thing to Mowgli and he would be at her mercy? That's what a cinnamon roll does to me. Somehow, I feel magically drawn towards it!

Cinnamon rolls lure me in in, like a wonderful psychedelic maelstrom of promising pleasure. This swirl, it shuts off the logical thinking part of my brain. It has secret come-hither-powers that should never be underestimated.

And lastly, the taste.

The taste! Can you picture biting into a freshly baked cinnamon roll right now? Sinking your teeth into that fluffy, gooey goodness? I bite into a cinnamon roll and it's like I have arrived IN THE NOW.

There are people that meditate for years to achieve this state of enlightenment. I am telling you. There's absolutely no need to travel to India and checking into the silent Ashram. No need to grow a beard or stop cutting your nails.

My dear sugar free and low carb friends, I have tried many versions of healthified (meaning: no-wheat, no-yeast, no-grains, no-sugar) cinnamon rolls using grain free flours such as almond or coconut flour. They all taste great, but their texture is either too cakey or crumbly to truly resemble the original, badass cinnamon rolls of my youth.

Then I tried this recipe.

Just looking at the close-up above is making me salivate again!

This keto cinnamon rolls recipe is made using the Holy Grail of Keto dough, which is a truly genius invention using mozzarella cheese.

It was conceived as a pizza base (I am talking about it in detail in my Genius Grain Free Pretzels post). With a few tweaks it makes a brilliant dough for sweet pastry as well.

I'd go as far as saying this: Holy Grail dough (which has become famous as Fat Head dough) is the cleverest brainwave since the conception of low carb eating.

I want to hug the person who thought of combining an Italian cheese with almond flour to create a dough that actually mimics the taste of wheat dough. How could you possibly come up with an idea like this? Was it a coincidence? Someone accidentally dropping flour into melted mozzarella? It's a bit like that person who banged two stones together and created fire. Boom, and the world is a better place.

The dough is a little tricky to handle - thanks to the inherent gooey-ness of mozzarella - but if you follow the instructions in the recipe section below, you should have no problems.

Here are the ingredients you'll need for low-carb cinnamon rolls:

For the cream cheese frosting:

Step 1: Melt the mozzarella in a large bowl. Add the egg and mix.

Step 2: Add the dry ingredients (almond flour, baking powder) and cream cheese to the mixture. Mix with a spatula, then knead until smooth.

Step 6: Cut each roll in half with a sharp knife...

Step 7: ...and place in a baking pan lined with parchment paper. Bake until golden!

The dough is a bit tricky to work with. Do oil your hands if you find it too sticky (I used walnut oil). If it cools down too much, just warm it back up to make it easier to handle.

You can use salted or unsalted butter instead of the water in the cinnamon filling, which gives the rolls a nice buttery taste. I made a few using butter, then decided to just dissolve the sweetener in water as the rolls are very high in fat already. The choice is yours!

If you do not have vanilla-flavoured stevia, add a bit of vanilla extract to your frosting.

Another option to make the rolls is to roll out the dough between 2 sheets of parchment paper into a large rectangle. Spread the cinnamon filling on top, roll into a log and cut into slices.

Can I prep these ahead?

Yes. You can prepare the dough a day or 2 ahead and store it in the fridge. Let it come to room temperature before baking.

How do I make them nut free?

Use ¼ cup or 30 grams of coconut flour in place of the almond flour. Or, use a blend of sesame seed and sunflower seed flour.

Can I make them with yeast?

This is a yeast free recipe. But you can add a sprinkle of instant active yeast for yeast flavor.

Keto cinnamon rolls are best enjoyed warm, when they are soft on the inside and with the most tender crunch on the outside.

Reheat individual rolls in the microwave for 10 - 15 seconds.

Refrigerator: Should you have any leftovers, keep them in an airtight container in the fridge. Store for up to 1 week.

Try my other fathead dough recipes: 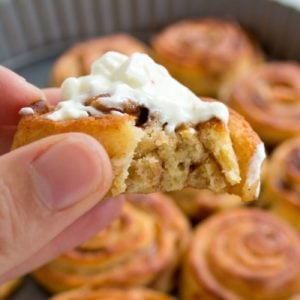 Katrin Nürnberger
from Sugar Free Londoner
Whether you're enjoying them as an afternoon treat or as part of a weekend breakfast, these keto cinnamon rolls will blow your mind. They're soft, chewy, fluffy and utterly delicious... yet without all the carbs and sugar of regular cinnamon rolls.
4.97 from 221 votes
Print Recipe Pin Recipe Rate
Prep Time 10 mins
Cook Time 20 mins
Total Time 30 mins
Course Breakfast
Cuisine British
Servings 12
Calories 94 kcal

1.3g net carbs per roll. Makes 12 rolls. This recipe works best with pre-shredded mozzarella from the supermarket. Fresh white  mozzarella contains too much liquid and is too runny. The dough is a bit tricky to work with. Do oil your hands if you find it too sticky. If it cools down too much, just warm it back up to make it easier to handle. Don't be fooled by the size of the rolls - they may be small, but are quite filling! If you have it, use a brown sugar alternative to make the filling - it has a taste very similar to brown sugar and works great with cinnamon. You can use butter instead of the water, which gives the rolls a nice buttery taste. I made a few using butter, then decided to just dissolve the sweetener in water as the rolls are very high in fat already. The choice is yours! If you do not have vanilla-flavoured stevia, you could add a bit of vanilla extract to your frosting. If you don't have extra fine almond flour and are using almond meal or ground almonds, add an additional 2 tablespoon of almond meal/ground almonds or 1 tablespoon of coconut flour.

This post contains Amazon Affiliate links. If you click on one of these links and purchase a product as a result, I may make a small commission. This money goes towards the running costs of the site. Thank you for supporting Sugar Free Londoner.

Hi, I'm Katrin! Since 2015, I have created and published hundreds of tasty sugar free and keto recipes on my website and in my e-cookbooks. I reclaimed my health by following a low carb diet, and so can you.